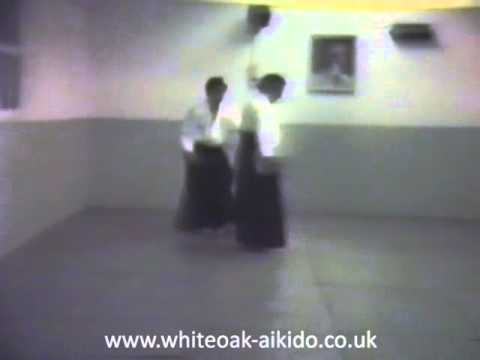 It has been roughly 20 years since I first put my foot on a Tatami. I am thinking about that number, if it actually has any relevance to me. I feel the need to commemorate that key moment where something has started that has accompanied and, undoubtedly, changed most of my life since then, and I choose to do it in English since the beginnings have happened in Reading, UK.

To be honest about the maths: I cannot actually claim to be doing Aikido for the entire 20 years. After Reading, I continued in two clubs in Regensburg, a broken shoulder joint and moving to other places then forced me to suspend training. I gave several tries to clubs in other towns and was sometimes discouraged by the immature mentality of people there. Having the right atmosphere among the members was always most important to me. I wouldn’t be able to learn from a teacher who I could not respect because he or she had not developed their personality together with their technical skills. Often I had to struggle with studies, jobs or the local language in foreign countries and simply lacked the strength and time to attend classes.

I certainly cannot present these 20 years as a magnificent success story. The least I can say is that I have continued against all odds (and despite the bad experiences with physical education at secondary school) and that I managed to get up again and again – which is probably not the worst attitude for the pursuit of martial arts. Thinking about it, I even wonder how some folks think they can grasp the essence of Budo from a fast and smooth career into the upper ranks during their young days.

I initially planned to celebrate my first club with some images or videos but couldn’t find anything matching time and place. I only found a video that dates from 6 years earlier and that stems from another dojo of the same organization, the British Institute of Aikido.

It is interesting to watch the execution of techniques from today’s standpoint. Much of the underlying principles seem to be similar to what I do today, although the typical movements of Nishio Sensei’s school, the “infamous information overload” and his technical perfectionism are missing. I remember the important role of bokken and jo in the Reading trainings, which probably was the most important motivation that led me to Nishio Aikido. We have extensively practiced ukemi (100 Mae Ukemi, if I’m not mistaken. Most people starting to stagger after 50 or so Ukemis, but Simon kept on going steadily and, at the same time, counting aloud!), happily applied Atemis, and I have learned to use the free hand as Uke to protect my face. Rather metaphysical concepts like the flow of Ki were handled in a rather down-to-earth manner, by hardening the muscles and twisting the hands slightly upwards. Movements were short and efficient, rather than wide and sweeping, you tried to stay close to the partner and keep control.

Looking back at all the years, the best times were not merely those of technical revelations but also incredibly hilarious moments during and after the classes. In that spirit, I would like to thank all my past Senseis and Ukes with a Double-Zen Applause, and I do hope from the bottom of my heart they have acquired not less bruises than I did!